But not how FiveThirtyEight leads you to predict

I created my own datasets by copying and pasting data from tables found in FiveThirtyEight’s blog posts and at CQ Voting and Elections Collection. I’ve made those data available on my GitHub. 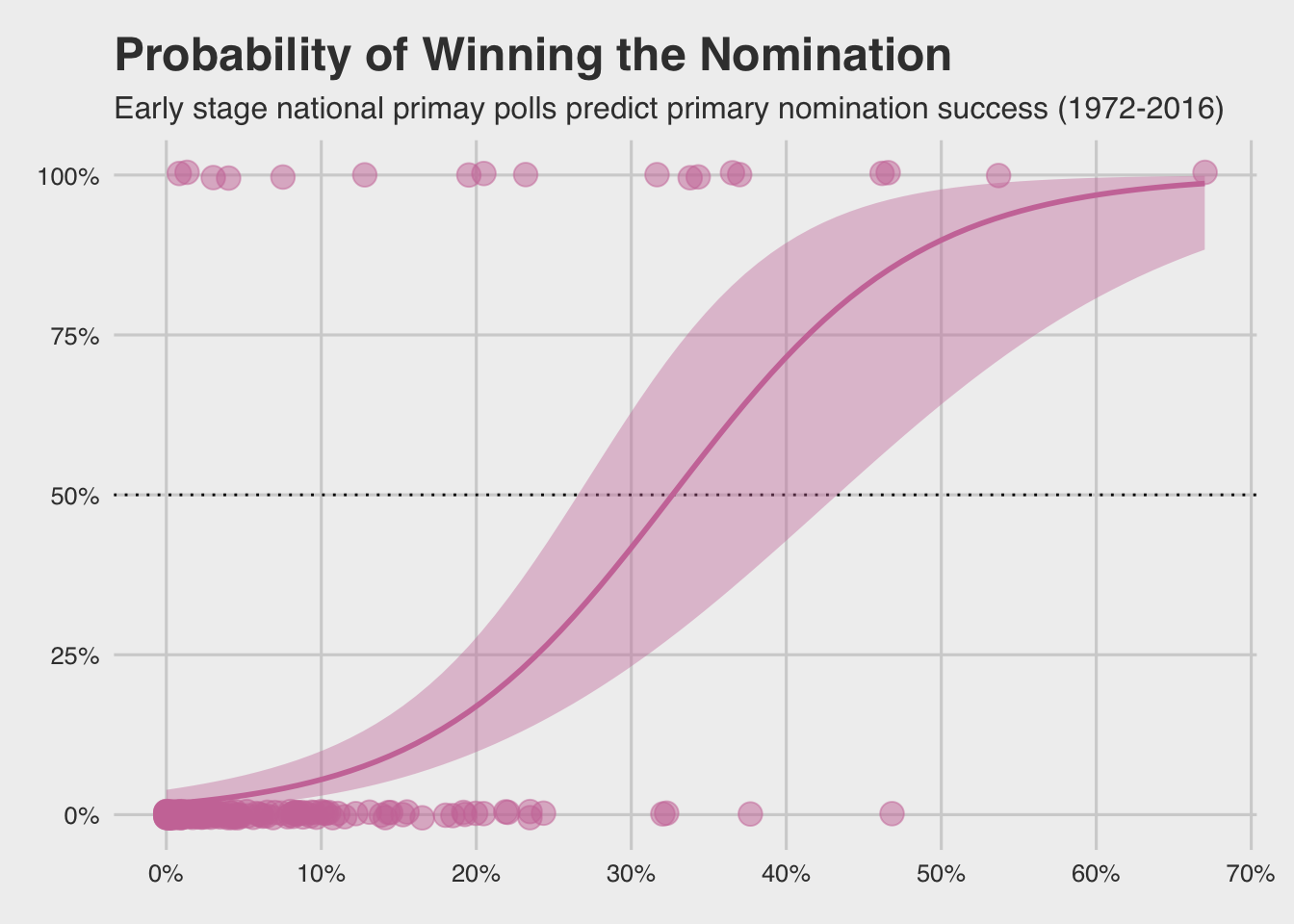 Figure 1: The ribbon represents 95% confidence intervals around the predictions. 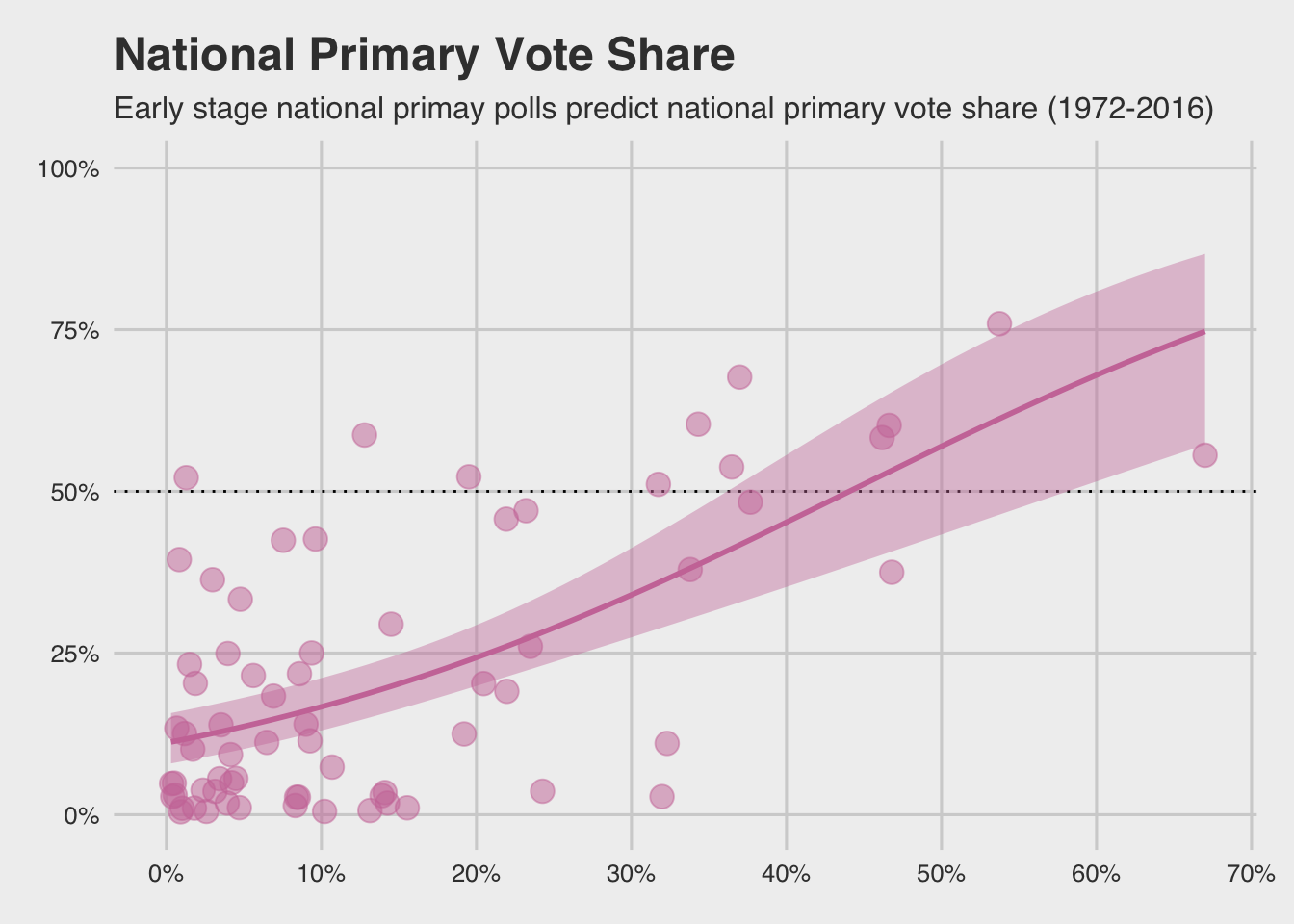 Figure 2: The ribbon represents 95% confidence intervals around the predictions. The vote share data are a little different from those presented by FiveThirtyEight because our sources were likely different.

In any case, few if any voters will actually vote for a candidate whose name they don’t recognize. So it shouldn’t be surprising that FiveThirtyEight’s data show that well known candidate’s win their party’s nomination way more often than not well known candidates. In fact, among the 19 candidates nominated by a major U.S. political party since 1972, only 4 were not well known during the early stages of the election (see Table 1 below); all of those nominees were Democrats (so none were Republicans).

In their blog series, Silver and Skelley each present a table and a figure that emphasize the nomination success of candiates across different levels of early national primary polling average and name recognition. They claim that combining these pieces of information can better predict nomination success than either piece of information by itself. Given that only 4 not well known candidates have ever won their party’s nomination, you should be skeptical of some of the predicions drawn from the values displayed in these tables and figures.

In both blog series, FiveThirtyEight makes specific (numeric) predictions based on the interaction between national primary polling average and name recognition. Based on the dataset compiled before the 2012 primary elections, Silver wrote,

And based on the the most recently compiled dataset, Skelley wrote,

And as you can see in the chart below, a low-name-recognition candidate didn’t stand much of a chance of winning unless they were able to climb past 10 percent in the polls in the first half of the year before the primaries. If they were able to hit that mark, then their odds of winning were slightly less than 1 in 4, which put them ahead of a high-name-recognition candidate polling at the same level.

These authors derived their predictions from logistic models based on the datasets available to them at the time. 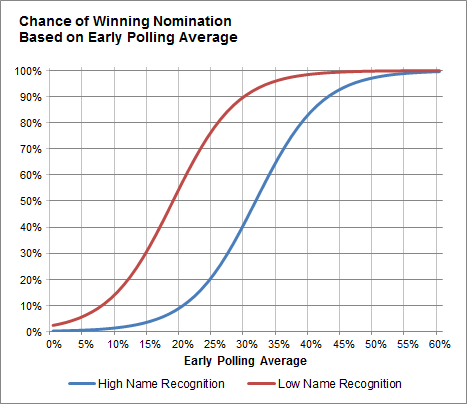 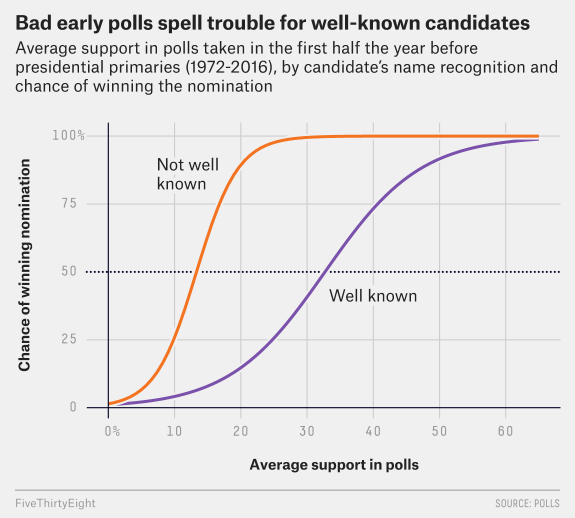 Figure from Skelly’s post, We Analyzed 40 Years Of Primary Polls. Even Early On, They’re Fairly Predictive.

Regressions can make predictions where data are thin (even absent).

There is one key problem with deriving these specific predictions from logistic regressions. The problem is that the authors did not give reasons for making predictions outside the range of available data. All regressions (including logistic regressions) can make predictions based on values that are scarce or even not avaialble in the datasets used in the regression analysis. In some contexts, analysts have good reasons to believe that unobserved data that fall outside the range of observed data will follow a pattern similar to the observed data. For example, you can use regression to predict someone’s height based on their weight, even if that person is a little taller (or shorter) than anyone in the dataset you used to construct your regression equation. The same logic applies to predicting market sales based on the month of the year. But even these extrapolations are limited: Some people are much heavier than you’d expect based on their height, and sometimes sales are much lower than you’d expect based on the month of the year; such expectations can be especially misguided if they’re derived from a regression equation based on very different people or years of business. 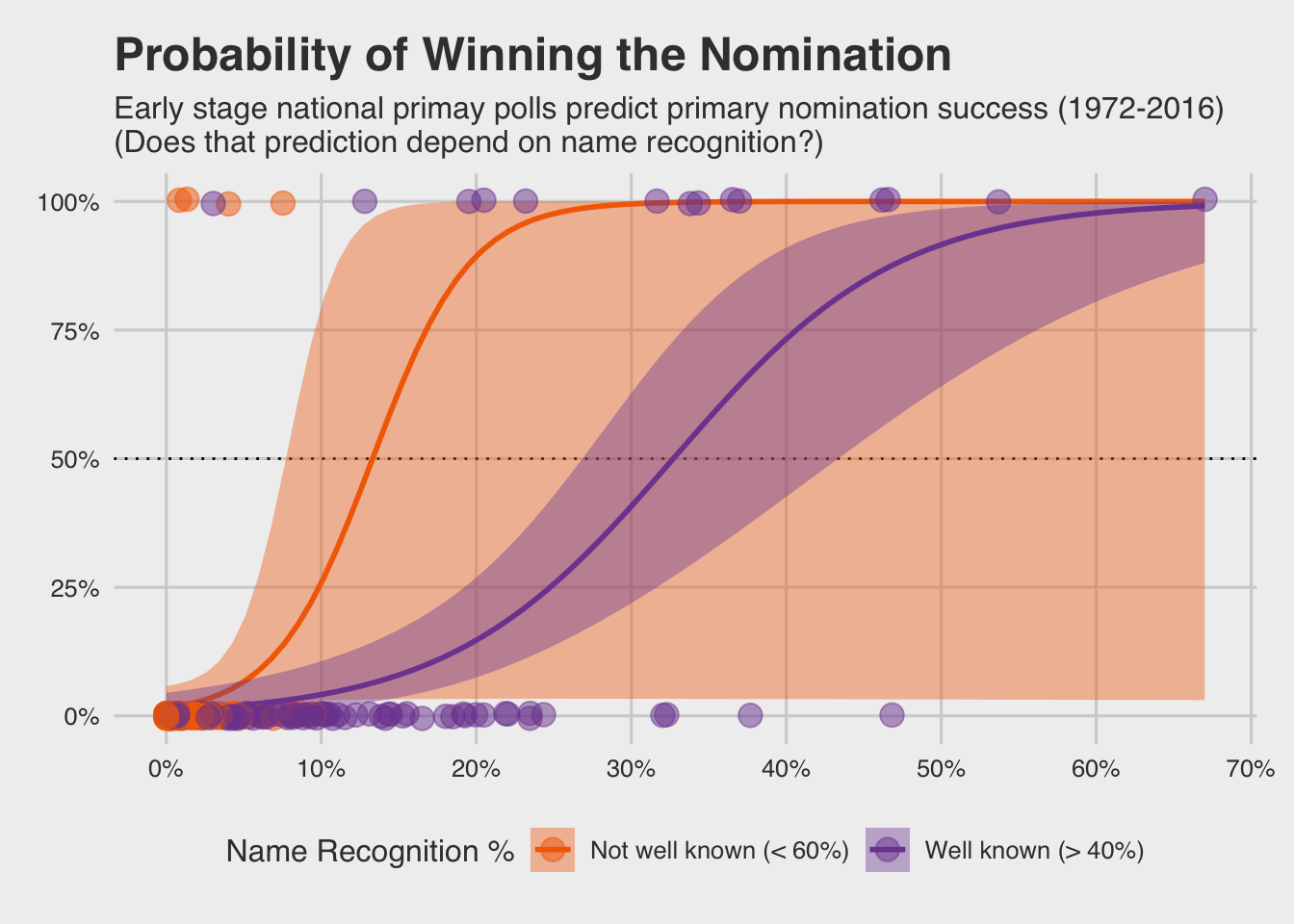 Figure 3: The ribbons represent 95% confidence intervals around the predictions. The orange ribbon (not well known) envelops most of the figure because no data are available in that range. 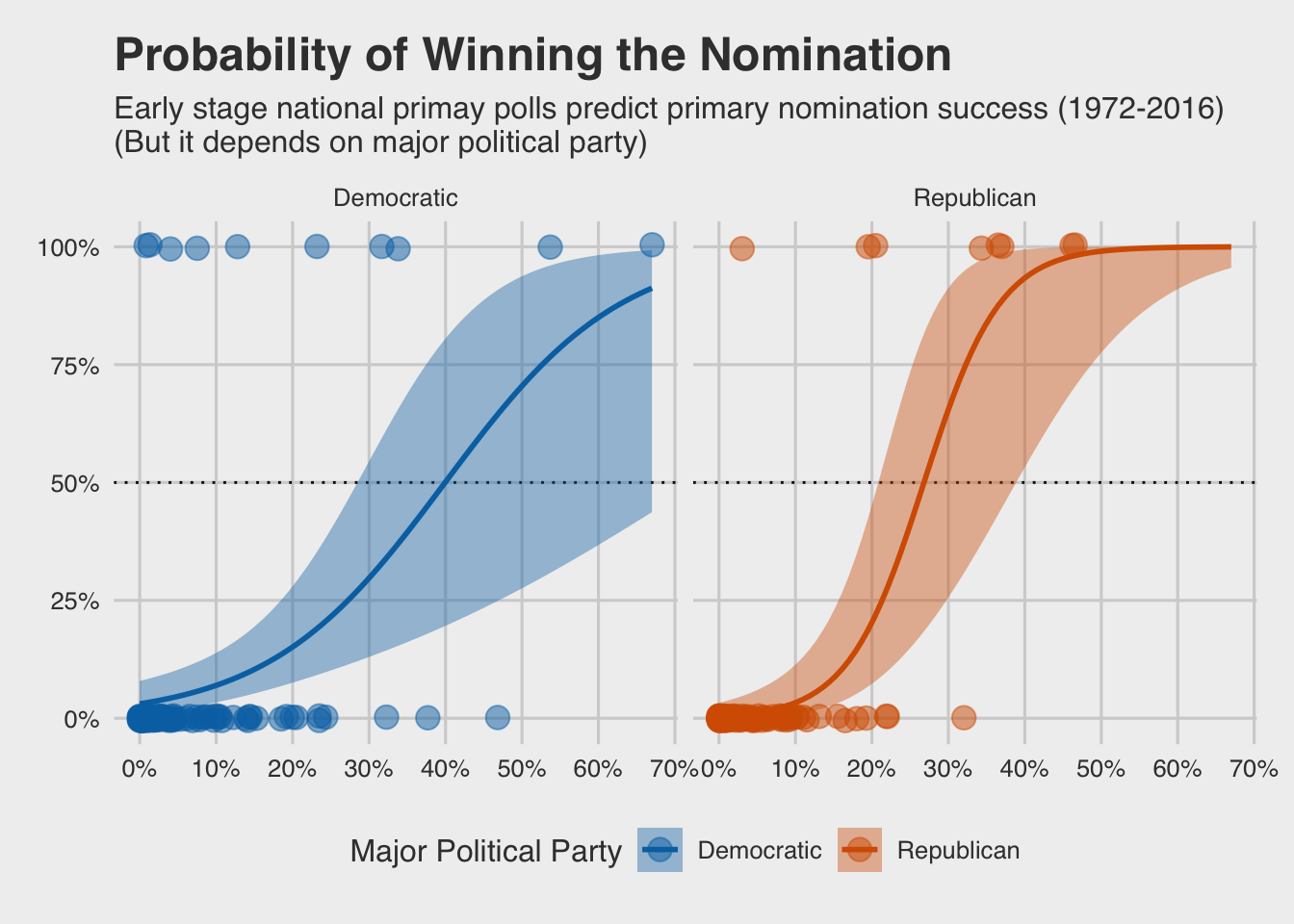 Figure 4: The ribbons represent 95% confidence intervals around the predictions. 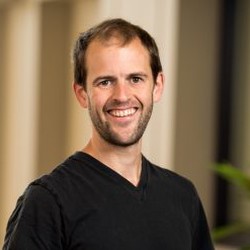 I study how both modern and evolutionarily-relevant threats affect how people perceive themselves and others.